After her mother passed, Ahstanskiaki Sandra Catherine Manyfeathers moved to Calgary with her sisters to leave behind the poverty they faced on the Blood Reserve, south of Calgary. But their search for a better life and hope for the future was met with unthinkable tragedy.

“When my mother passed, my sister Yvonne took us in as her own — she taught us how to cook, how to be good homemakers, how to love one another. In 1991, she was murdered. She was kicked in the head until she was not cognitively there and died of her injuries. To lose her devastated our family,” says Manyfeathers, former UCalgary student and current instructor of Blackfoot language in the Werklund School of Education.

“In 2007, my other sister Jackie was murdered on 17th Avenue. She was stabbed in an act of violence during the Calgary Stampede. To lose her further devastated our family. It’s even harder to get closure because nobody was ever charged in her murder.”

Acts of genocide against Indigenous women

Recognizing the gravity of systemic violence toward Indigenous women and girls, the Government of Canada launched a national inquiry into the crisis in 2016.

Among the numerous recommendations in the final report published in 2019, the inquiry finds that the long-standing violence — including multigenerational trauma caused through generations of colonization, sexual exploitation and abuse, and social and economic marginalization — can only be seen as genocide.

Initiated by Métis artist Jaime Black in 2010 and brought to UCalgary in 2017 by Yvonne Poitras Pratt, associate professor and director of Indigenous education in the Werklund School of Education, the REDress Project is an art installation calling attention to the crisis faced by Indigenous communities.

“The project came about as a way of raising public awareness around the issue of murdered and missing Indigenous women and girls in Canada. It’s meant to provoke attention, get people to ask questions, and around campus, it’s a way of starting to engage with our Indigenous community in a meaningful and respectful way,” Poitras Pratt explains.

Symbolic of the many women lost to violent crime throughout the years, Poitras Pratt says the dresses are a way of honouring their lives while bringing the crisis to the attention of mainstream Canadians and calling for action to prevent future violence.

“When I see a red dress, I think of the woman that could have been wearing it. I think of my sisters,” says Manyfeathers. “When I stand next to a red dress that’s hanging, I stop to acknowledge it because to me, it represents somebody’s life that was taken from us and from someone who loved that individual.

“Creating awareness is a step towards making Canada a better place where women are not murdered and left to die alone without dignity. We’re just beginning with projects like this one.”

If you think you have experienced sexual violence, or know someone who has, visit the Sexual Violence Support website for campus and community resources. You can also arrange a confidential consultation with the university’s sexual violence support team, by confidential email.

Exhibition on Indigenous Archival Project on display at Nickle Galleries 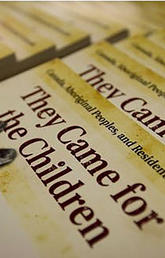 British Columbia’s ban on ‘birth alerts:’ A guiding light on the road to reconciliation 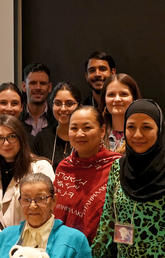