The rebirth of Leon the Frog

Students, faculty, staff and alumni step up to restore the beloved poem to the stairs of the Social Sciences tower

The beloved story/poem of Leon, scrawled up the stairs of the Social Sciences tower at the University of Calgary in the 1970s, going up all 13 floors — mistakenly erased as part of an effort to remove graffiti from campus — has been restored in grand style thanks to a crew of about 30 volunteers, including students, faculty, staff, and alumni.

The April 13 restoration included the painting of a brand new mural and poem at the bottom of the stairs. This work of art is a collaborative effort between poet Derek Beaulieu, BA’96, MA’04, BEd’08, and recent Poet Laureate of Calgary, and Avril Lopez, an MFA student in the Department of Art.

Beaulieu’s new 13-line poem contains just four words: frog, splash, old, pond. Those words have been broken into pieces, as if to convey steps, and, those word fragments are staggered in each line, “leaping back and forth, as if you’re hopping up the stairs of the Social Sciences building,” said Beaulieu.

The new poem is inspired by a 17th century Japanese haiku, which, ironically enough, was also the source of a 2005 book by Beaulieu, co-written with Hamilton poet Gary Barwin, called Frogments from the Fragpool.

New ways of looking and reading

“It made sense to me use a poem from that book for this mural,” said Beaulieu. “It’s a 13-line poem, one line for every story of the building. And it incorporates not just the English department and poetry, but also translation, other cultures, and an understanding that things aren’t always as they seem — that we can find new ways of looking and reading.”

In short, the poem seemed to abstractly sum up a few of the deeper concepts studied each day in the Faculty of Arts.

The original tale of Leon the Frog was written around 1974 by five art students (many of whom went on to noteworthy art careers) including Joanne Cardinal-Schubert, Rita McKeough, Tony Acosta, Robin Laurence, and Catherine McAvity. It was written in felt marker, which faded over the years, so it has been re-stenciled multiple times since its original inscription, with changes and additions being made at various stages.

When plans kicked off to restore the widely cherished poem — an initiative led by alumnus Ian Kinney, who had previously contributed to a 2007 re-lettering of faded parts of the poem — Beaulieu was keen to participate.

“I’m thrilled,” he says. “I’ve done a number of degrees at the University of Calgary and I’ve walked up and down those stairs hundreds of times. I love the poem and I do consider it to be a great work of public art."

“As poetry, it may not strike you as being particularly high quality. But in 1974 you had five artists — not writers, but artists — who saw themselves as creating a happening, a moment of improvisational art that would turn on a community. It’s a collaboratively written poem that speaks to its environment that has been in the same space for over 40 years and read by tens of thousands of people. This is exactly what we want out of a piece of a literary art in this city.”

Brit Paris, incoming president of the Graduate Students’ Association, was one of the volunteers on April 13. She believes Leon the Frog is important to campus culture. “So often it’s these student initiatives that help bond our community,” Paris says. “The story of Leon the Frog belongs to the students. We’re the ones who take the stairs every day and read it. And it was students who wrote it in the first place. We own this.”

Another volunteer, Diane McInnes, wholeheartedly agrees. She had worked on campus since 1975, retiring just last year from her job as grad program administrator in the Department of History and she had also been a student, earning her BA in sociology in 1982. In that time she has come to love Leon.

“I spent so much of life here and I walked these stairs constantly,” said McInnes. “Leon the Frog amused me every time. I thought it was such a funny poem, just completely irreverent. I was horrified when it was erased — my kids too, because they also went to university here. I felt a sentimental attachment to the poem and I was grateful for the opportunity to help restore it.”

And in the future, with the mural and a plaque underscoring the importance of the poem, Leon the Frog will not be erased again, says Beaulieu.

“This was created by five artists as a temporary thing, as a moment of graffiti,” Beaulieu notes. “This was something that wasn’t supposed to last. It lasted by accident. What we’ve done now changes that tone. We have a team of people who worked to make this adored poem permanent. I think it’s a really lovely moment.” 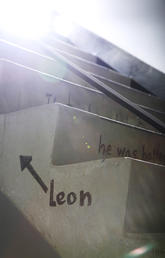 Leon the Frog to rise again 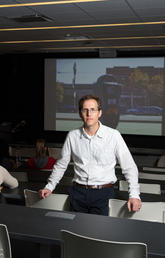 Honouring a few of our finest

In the News: UCalgary News