Leon the Frog to rise again

Volunteers are invited to participate in the Leon the Frog restoration event, scheduled for April 13 Photo by Riley Brandt, University of Calgary

Take heart, University of Calgary students, staff and faculty, past and present – Leon the Frog will live to ribbit and regale again.

The tale of Leon the Frog, a pun-filled story/poem that was written on the stairs of the Social Sciences tower in the 1970s, going up all 13 floors, was mistakenly painted over last week, as part of an effort to remove graffiti from campus.

The poem has become a beloved feature of the building and is treasured as a quirky bit of the University of Calgary’s rich history. It is regarded as a work of public art that has been embraced fondly by the campus community, and, in particular the Faculty of Arts.

When its loss was first noted on the morning of Friday, March 31, it sparked an outpouring of disappointment and confusion on social media as to why the poem was removed.

Plans are underway to restore the widely cherished poem. The restoration will be led by alumnus Ian Kinney, who had previously contributed to a 2007 re-lettering of faded parts of the poem as a student, along with then Students’ Union social sciences representative Teale Phelps Bondaroff.

The Faculty of Arts will be seeking up to 50 student and alumni volunteers to participate in the restoration event, which will take place on April 13. A web form has been set up for those who wish to volunteer.

“If you are a student who has studied in the arts or humanities at the University of Calgary in the past 40 years, then Leon the Frog was a part of your campus experience,” says Kinney. “There were always those words on the steps, hopping along with you as you went from floor to floor, department to department. When that was removed it was an institutional and cultural loss. I feel it’s our responsibility to restore that.”

Leon the Frog was written around 1974 by five art students (many of whom went on to noteworthy art careers) including Joanne Cardinal-Schubert, Tony Acosta, Robin Laurence, Catherine McAvity and Rita McKeough. The amphibious hero of the poem was said to be a metaphor for a student “lost in space.” The poem was written in felt marker which faded over the years so it has been re-stenciled multiple times since its original inscription, with changes and additions being made at various stages. When Kinney and Phelps Bondaroff restored the poem in 2007 they added an extra stanza on the floor leading up to the tower’s roof.

Richard Sigurdson, dean of the Faculty of Arts agrees with the institutional importance of Leon the Frog and he supports the restoration project. “The tale of Leon the Frog is a charming staple of the University of Calgary’s history and it’s been dear to social sciences, humanities, communications and fine arts students for decades,” says Sigurdson. “It’s important to the Faculty of Arts that this work of public art be restored.”

Along with the restoration there will be a mural added to the artwork featuring an official historical statement about the significance of the Leon the Frog tale.

“This should ensure that the poem will not be mistaken as graffiti again,” says Kinney. “This time the artistic value and the institutional memory that the poem stands for will recognized for what it is.”

“This is a rare and unique opportunity to recreate this art and carry it forward for future generations.” 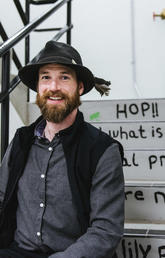 The rebirth of Leon the Frog

In the News: The Gauntlet

In the News: CBC News Calgary

Step by step, iconic 'Leon the Frog' stairwell poem at U of C to be restored