Their goals are lofty, but Graham Vigrass and Jay Blankenau have momentum and are ready for high-pressure play

Update: The men’s volleyball team was knocked out in quarter-finals at Tokyo Olympics.

When asked independently about their favourite moment of the 2016 Olympics, Graham Vigrass and Jay Blankenau offer the same answer.

Now bound for the Tokyo Olympics, the former volleyball stars of the UCalgary Dinos will never forget Aug. 5, 2016.

It was the night they marched into Maracanã Stadium in Rio de Janeiro, Brazil.

"I had been to a few International University Sports Federation Games where they had pretty big opening ceremonies, 50,000 people, so I just thought that would be the same — I wasn't too jazzed up for it," recalled Blankenau. "But the moment we were walking down the tunnel into the stadium, it just hit me: This is Olympic opening ceremonies. That was a pretty big feeling."

For Vigrass, his genuine appreciation began a little earlier on the bus ride to the venue when people spontaneously broke into a rendition of O Canada.

"There was just a great sense of pride," he said. "Then walking into the stadium and seeing all the fans, all the other Canadians, having a great time."

Perhaps their arriving at the same conclusion shouldn't come as a surprise. After all, it had been 24 years since the Canadian men's indoor volleyball team had qualified for the Summer Games, so it stood to reason that returning to sport's grandest stage would resonate. It certainly did for Vigrass and Blankenau.

What they learned in Rio

For the team, the 2016 Olympic tournament had started in fine fashion — a sweep of the U.S. entry in the round-robin's opening match. After a 3-2 pool record, the Canadians ended up falling to Russia in the quarter-final.

"I think we realized that we were able to play with top teams in the world," said Blankenau, a setter. "It gave us this feeling of, 'We're right there.' It was motivating for us."

Sure enough, five years later, they're back.

Blankenau and Vigrass — who, in 2010, teamed up in the Dinos' national championship (the latter was named tournament MVP) — helped the Canadians once again qualify for the Olympics. Now, in Toyko, they're eager for another shot at glory.

Expectations this time around are lofty.

"We're all optimistic," said Vigrass, who graduated in June 2021 with a Bachelor of Science from UCalgary. "We're all pushing towards a medal, that's what we're always talking about. The podium is in reach for a lot of teams there."

Helping matters? Seven of the 12 current team members now have Olympic experience, which is advantageous going into the quadrennial pressure-cooker.

"Everyone's nervous at the Olympics because it is the biggest stage for volleyball," said Vigrass. "[2016] helped me to know, OK, I'm nervous, but so is the guy on the other side of the net. When you play in matches like that, it doesn't really matter how many matches you've been in. It's still such a big moment. It's new for everyone."

Adjusting for Olympics during a pandemic

In the coming days, there promises to be an extra level of adjustment. With COVID measures in place, athletes aren't sure exactly what to expect beyond a wholly unique experience.

"Who knows what it's going to be like?" said Blankenau, who graduated with a Bachelor of Arts in 2012. "There's going to be some surprises, for sure."

It's fair to say that elite athletes all over the planet have learned how to adapt in the past 18 months.

After the Canadians qualified for the Summer Games in January 2020, they watched as the world got shut down, nixing the Olympics for that year.

"It was shocking for us, obviously," said Blankenau. "We were all pretty geared up. We weren't sure what was going to go on with the national team. When we heard it was cancelled, I think everyone was pretty disappointed right off the bat because we were pretty gassed-up."

The pandemic left the two Calgarians, who play professionally in Turkey, making do during the summer of 2020. They worked out at home, alone, using borrowed gear in makeshift gyms and wondering about the future.

"It was stressful not knowing if there was going to be an Olympics," said Vigrass. Now uncertainty has been replaced by excitement.

Blankenau remembers an on-court meeting immediately after their final match of the 2016 Olympics.

"One of the guys on the team said, 'We're going to be back here. We'll be back here,'" said Blankenau. "It's definitely interesting that most of us are back now — kind of cool." 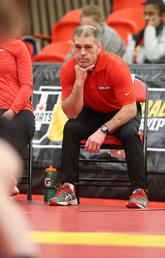 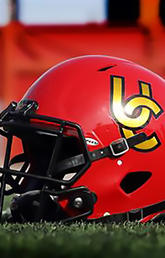 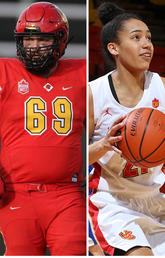 How deep is the impact of a non-season on the Dinos? 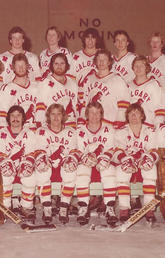