These alumni couples found love under the UCalgary Arch

Love. We want it. We need it. And today — just short of Valentine’s Day — we toast 7 examples of love that began at the University of Calgary

February is a month when the skin of the world can feel thin, permeable — and perhaps even moreso this year as too many of us may feel pricked by yet another milestone we can’t celebrate. When we recently invited readers to share their enduring love stories, we were braced for all the usual Hallmark metaphors of love  ... being a journey, a fruit, a garden, a two-way street or, heaven help us, a highway — but we received not one cliché. Here you’ll find seven fresh little love stories shared by alumni couples who counted the ways when asked, “How do I love thee ...”

When Lesley Hatheway met Vijay Ramlakhan some 19 years ago while volunteering for the Dinos, he was a fourth-year student, she a first. Vijay, BSc’03, remembers spotting Lesley, BA’09, on the stairs to the Jack Simpson Gym, and misreading her nametag by calling her “Lindsey” for the first 24 hours. Ten days later, they were a couple. They tied the knot a couple of years after that, and both still work part-time for the UC Dinos Scoretable. 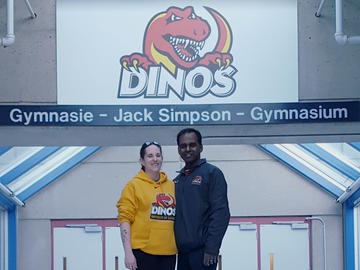 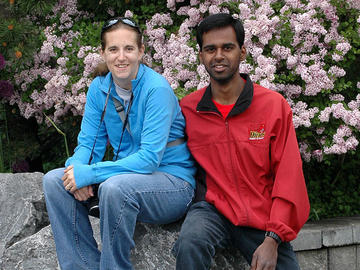 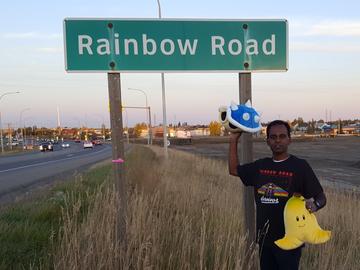 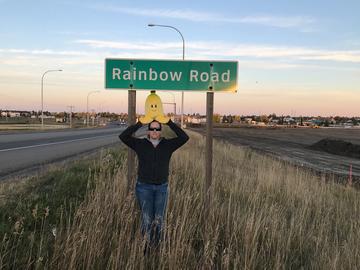 The cheesiest thing Vijay admits to doing for love was how he proposed. Back in 2005, the couple’s favourite Dinos game-day role was what is known as prize patrol. During a basketball or volleyball time-out, their “job” was to toss toys into the audience and whip up the crowd. Behind the scenes, they often pummelled each other with these little stuffies — their favourite being a penguin. After three years of dating, Vijay steered Lesley to the staircase at the gym and began bopping her with a stuffed penguin, upon whose wing he’d fixed a ring. Once Lesley spotted that, “She didn’t even wait for me to ask the question,” writes Vijay in an email. “She just said, ‘Put it on!’”

Respect each other as individuals. “Just because we are married, it doesn’t mean we have to do everything together,” adds Vijay. “If one of us wants to do something, the other is always able to opt out freely; there is no restriction or obligation on either side.”

Don’t neglect the small stuff. “Back in the day, Vijay used to leave me little notes on stickies or random pieces of paper,” writes Lesley. “My favourite simply says: mwah! I have it glued into a journal for safekeeping.”

Betsy, MD’88, says they became fast friends at UCalgary, but nothing progressed, which is why she decided to pursue her “internship year as far away as I could get [Dalhousie University], so I could forget about him. Clearly, this was a flawed strategy.” Eventually, they did get together, married in 1992 and both work in medicine at UCalgary — Derek, BSc’85, MD’88, is a dermatologist in private practice, as well as being on faculty; Betsy is a family physician and director of alumni engagement at CSM.

Understand each other’s work. “Besides Derek’s ability to make me laugh every day, I think we both value being with someone who truly understands each other’s work life,” says Betsy. “Being a doctor can be hard, and it’s been extra-challenging and sometimes downright awful in the past year, but I always know that he understands and supports me, and vice versa.”

Once their eyes locked during a Red Light/Green Light party in what was then called the Grad Lounge, there was no turning back.

Or so recalls Dr. Jevan Cherniwchan, PhD’13, an economics grad who met Dr. Lauren Mercier, PhD’12, in 2009 during an “anti-Valentine’s Day thing.” The idea was to wear red if you were in a relationship, green if you were there to meet someone, and yellow if you were jaded. So, of course Jevan wore black, Lauren was decked out in blue ... could there be merit in colour-coding data?

As for their first date, they both claim it was unforgettable. Not in the way that a snowmobile trip across Siberia might be — but because Jevan was 30 minutes late, causing Lauren to think she’d been stood up. “It was before smartphones,” recalls Jevan. “In fact, I’m pretty sure that I used MapQuest to print off directions.” That said, between the Thai food that followed, which morphed into a marathon “chat” at a teashop, his tardiness — a trait Jevan hasn’t quite shaken, writes Lauren — all was forgiven. 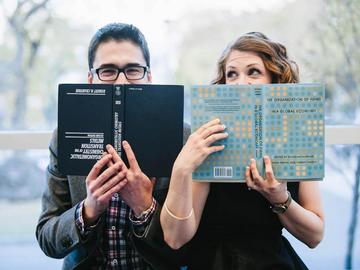 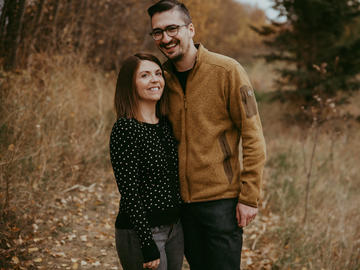 Communicate, communicate and then communicate some more. When Lauren, now manager for NAIT’s Centre for Innovative Media, was toiling over her PhD in chemistry, she was required to travel to Japan, Quebec and Germany for long periods of time, “abandoning” Jevan in Alberta. “Between Skype and FaceTime, we found time to communicate every day and support each other through our careers,” writes Lauren, which was no small feat as it took six years for her to complete her doctorate.

Enduring attractions. Lauren quips that it’s always been Jevan’s looks — “tall, dark and handsome” — but quickly adds what truly nailed it “was his intelligence and wealth of knowledge on topics for which I know nothing. We come from completely different disciplines so I find his way of tackling a problem very interesting. This, however, doesn’t always work in my favour during an argument ...”

Now an associate professor at Carleton University, Jevan adds that, initially, it was Lauren’s eyes that snagged him. Since then, it has been “her intelligence and passion that have kept me hooked.”

Lois confesses she thought she’d done “something wrong and was in trouble. But, instead, he asked me for a date.”

According to Lois, the date was the “strangest,” explaining it was a double date at an all-you-can-eat Chinese food restaurant. “Richard and his friend loaded their plates at the buffet, put their heads down, and ate. And refilled plates and ate. They barely talked at all; they were too busy eating. The friend’s wife got drunk and began talking and gesturing like a ‘Southern belle’ as she told me of her university life in south Texas.

At the end of the date, Richard shook hands with me at my door and asked for another date. All very gentlemanly ... but what he didn’t tell me for another few dates was that he had mono. It was the strangest first date I’d had, and so, I suppose, I was intrigued!” 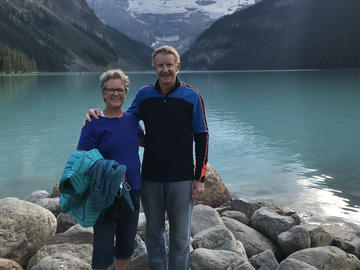 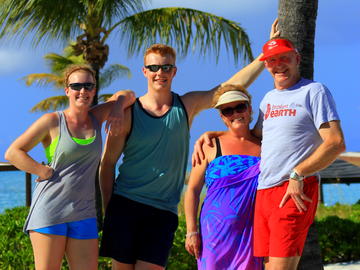 Opposites do attract. For Lois, one of her biggest fears when applying for med school was how she’d cope with being on call. “I thought it might kill me,” she writes. “But then I saw how easily Richard bounced back after a sleepless night and so I thought that call couldn’t be as bad as I imagined. Wrong! I chose the wrong role model when it came to functioning with no sleep. He had so much energy and somehow managed to pack each day full with fun/interesting activities. That trait continues and has meant we’ve had very full and interesting lives. I try to keep up but, frankly, I need way more quiet time and sleep than he does. I suppose we’ve learned to adapt to each other’s needs.”

Navigating differences. Two attributes that Richard prizes are Lois’s management skills and financial acuity. “She is very organized and skilled at dealing with every fine detail,” he writes. Adds Lois: “Keep working continuously on communicating. Busy lives and full schedules mean there’s a lot of juggling for time together, time with family, time for recreation.”

“Henry was bugging me, like a Grade 5 boy bugs his crush,” writes former Dino Joanna Bekkering (nee Niemczewska), BSc’06, recalling their first encounter at Ceili’s Pub in 2007 where a mutual posse of basketball and volleyball friends was drinking.

That led to a first date when Joanna told Henry, BA’09, that she’d invite all their friends to the pub, too. That’s when Henry, a Dinos basketball player at the time, realized Joanna was “clueless” and was forced to say, “This is a date-date where I am paying and everything.”

“It all worked out,” adds Joanna. “We went to an all-you-can-eat-sushi joint where we laughed ’til our cheeks hurt. I admit I was curious as to whether he’d go for a kiss. That was something I’d have to initiate on the next date, I thought later, as I settled for his side hug.” 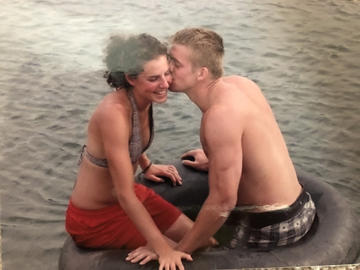 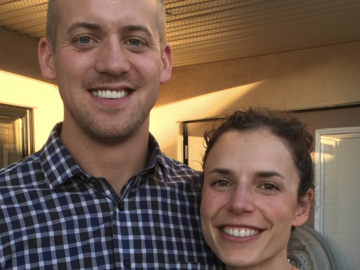 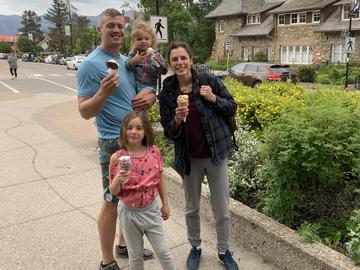 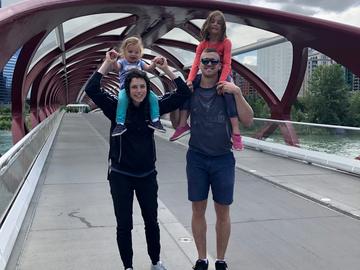 Most treasured memory. On a completely unrelated matter, the two Dinos found themselves in a doctor’s office in Holland, where Henry was playing professional basketball and Joanna was working on her master’s in urban and spatial planning. That’s when they saw a two-month-old baby pop up on an ultrasound screen. “It took our breath away,” writes Joanna.

If we were doling out prizes for long-distance tenacity or most memorable dates, Dr. Alyson Kenward, BSc’03, PhD’09, and Dr. Jeff Van Humbeck, BSc’05, would win. After meeting in a chemistry lab in 2005 and dating for a year, Jeff left to complete his PhD at Princeton while Alyson remained in Calgary to finish work here. They lived apart for three years, surviving on nightly video chats and once-a-quarter “live” visits.

“It was kind of like COVID times for us,” writes Alyson. “But we were so busy with our research and spending long hours in the lab, that it seemed to work out.” 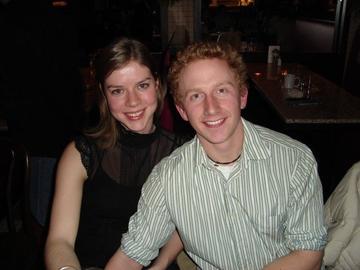 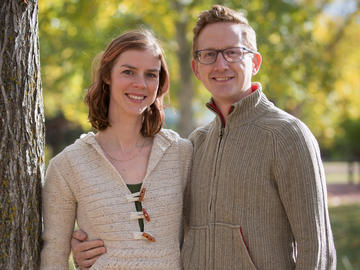 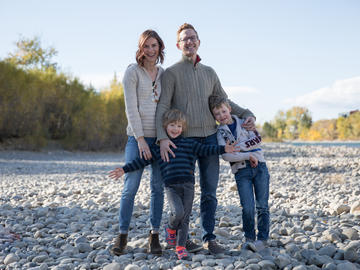 Memorable dates. “That’s tough,” admits Alyson, UCalgary’s associate vice-president, Advancement Services. “We’ve had some special ones — including a birthday night out on Broadway in New York, a picnic on the lawn at Versailles and a day-long cross-Calgary scavenger hunt that ended with dinner in Canmore. But perhaps the most memorable was the night we grabbed some Starbucks, went to a school parking lot and I tried to teach Jeff to drive a standard. Needless to say, all these years later, our cars have always had automatic transmissions.”

Being drama students, our next couple found themselves, repeatedly, getting married onstage. “That was before we realized the chemistry wasn’t really an act,” writes Jonathan Love, BA’97, MFA’03. He remembers swooning over Kate Pakarnyk’s performance as Molly in The Deck by UCalgary Prof. Clem Martini and thinking “she was way out of my league ... but loving how she spoke and the way she moved. I still do.”

Meanwhile, Kate, BFA’01, was falling for Jonathan’s “talent and his curls, his charm; he’s a charismatic guy.”

As for advice, Jonathan quips “marry up” while Kate adds: “Find someone who makes you laugh.” 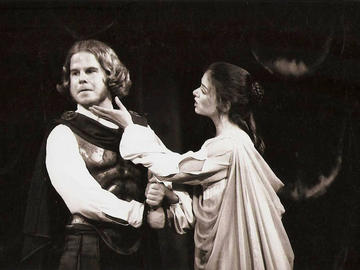 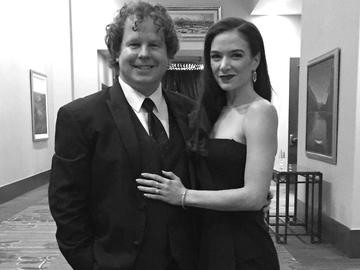 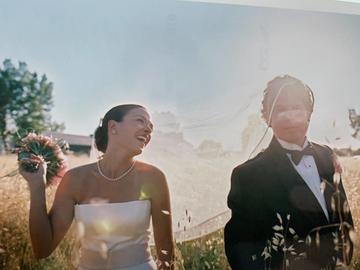 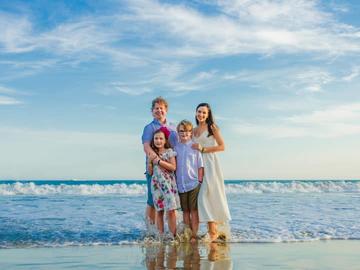 Greatest accomplishment. Hands down, it’s their “co-productions” they beam over most. “We moved from the stage to suburbia and produced two offspring, both of whom have talent to spare,” writes Kate, now a dance and yoga teacher at Robert Thirsk High School. “One is a guitarist/graphic artist and the other wants to be an engineer or the Tooth Fairy.”

Adds Jonathan, lead baritone and head songwriter with the popular a cappella quartet, the Heebee-jeebees: “The fact that, like onstage, we could get married eight shows a week from now until forever and, although I may mess up my lines, I’d fall head over heels for her ... Every. Single. Time.”

Not to diminish any of our short takes on love, Jonathan likes to point out their tale is a “true LOVE story!”

Editor’s Note: Psychologists tell us that the greatest threat to human happiness is feeling isolated. What you just read was not that. In March’s Alumni newsletter, however, we will tackle that very subject with a probe as to what dating — in a post-COVID-19 world — may look like.

Drama grad talks her way to a successful career

Speedskater-turned-coach and massage therapist riffs on life, sports, and life after sports