Preventing concussions and injury among female youth rugby players is the focus of an international study led by researchers from the University of Calgary that has received a major grant from the sport's global governing body, World Rugby.

The SHRed Concussions team, from the Faculty of Kinesiology’s Sport Injury Prevention Research Centre (SIPRC), in partnership with Rugby Canada, will receive around $500,000 to support a study into rugby-related concussions and injuries.

Women’s rugby is one of the fastest-growing sports internationally with more than 2.7 million players worldwide. With the eagerly anticipated, COVID-19-delayed Rugby World Cup happening this fall in New Zealand, these figures are likely to grow.

Prioritizing injury and concussion-prevention among female rugby players is a World Rugby priority. In 2021, as part of its six-point strategy on player welfare, the organization doubled its research-investment commitment to make rugby safer for all players, with a global call for research proposals in priority areas, including female rugby.

Stepping up to meet this challenge Emery, West and Shill submitted a proposal to lead an international study to develop, implement and evaluate the effectiveness of a multifaceted approach to injury and concussion-prevention in the youth female game. The grant will support the creation of a large study of youth female rugby across Canada and the United Kingdom.

“The most exciting thing about this opportunity to build an international research team focused on the prevention of injuries and concussions in female youth rugby is to engage the leadership and successes of Dr. Stephen West and Isla Shill, bringing together an international research team in a field in which they share a passion for player welfare in youth rugby,” says Emery, who is a kinesiology and Tier 1 Canada Research Chair in Concussion.

Adds West: “I am excited to lead this project, bringing together academic colleagues from across Canada and the United Kingdom to work closely with players, coaches, parents, national and international governing bodies to make the game as safe as possible for girls playing the sport.”

A unique feature of this work, West says, is that “this peer-reviewed grant also provides the opportunity for  scaling up the work internationally which Shill has been leading here in Canada focusing on injury-prevention strategies within this population.”

The three-year study will involve sites in Calgary, Winnipeg, Quebec City and Vancouver in Canada, and Bath and Leeds in England. Its goal is to establish international female youth rugby injury and concussion rates, evaluate the effectiveness of neuromuscular training warm-ups and tackle training programs in preventing injuries, and examine the contribution of law changes and protective equipment in optimizing safety in the female youth game. The research in the UK will be led by Professor Keith Stokes, Centre for Health, Injury and Illness Prevention in Sport, University of Bath, in collaboration with Professor Ben Jones, Carnegie School of Sport, Leeds Beckett University.

“Unfortunately, we know that the rate and burden of injury and concussion in female youth players in Canada is higher than males and this requires urgent attention for player welfare,” says West, who is the Canadian Institutes of Health Research Postdoctoral Fellow with SIPRC.

There is a huge gap in the female youth game and a need to support female-specific evidence-informed injury prevention strategies, says Shill, who was herself a Dinos rugby player and is currently a rugby coach. "There is an appetite and strong engagement of coaches and players in research right now to support player safety,” she says.

World Rugby looks forward to seeing "tangible outcomes that will further support our evidence-based approach to advancing welfare for players at all levels of the game," says Mark Harrington, the organization's Chief Player Welfare and Rugby Services Officer. "This prestigious grant also highlights the long and successful relationship SIPRC has had with Rugby Canada. As the governing body responsible for the successful growth of rugby and player welfare in Canada, Rugby Canada will play an important part in the success of this research program."

Adds Kinesiology Dean Penny Werthner: "I want to acknowledge this tremendous work from Carolyn’s team in SIPRC, the Faculty of Kinesiology and UCalgary to narrow the huge gap in youth female rugby injuries and concussions.

“This grant ... caps off an amazing few years in alignment with a National Football League (NFL) Play Smart Play Safe Program-funded SHRed Concussions study, Tier 1 Canada Research Chair in Concussion, the Canada Foundation for Innovation-funded SHRed Mobile, and the Faculty of Kinesiology being recognized as North America’s top sport science faculty for the third year in a row."

Dr. Stephen West, PhD, is a Canadian Institutes of Health Research Postdoctoral Fellow in the Sport Injury Prevention Research Centre in the Faculty of Kinesiology.

The Faculty of Kinesiology is ranked the No. 1 sport science school in North America and No. 10 globally. 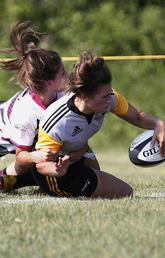 In the News: The Conversation Canada 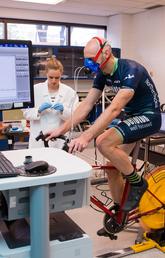 Faculty of Kinesiology is No. 1 in North America and No. 10 for sport science schools worldwide 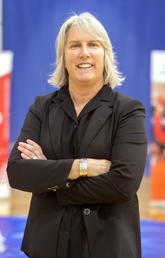 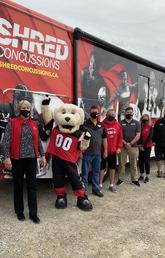 Innovative project SHReds concussions and injuries in youth across Alberta 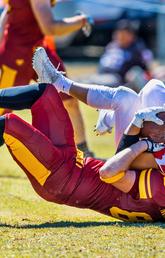 Concussion affects 1 in 10 youth athletes every year. Here’s what needs to change. 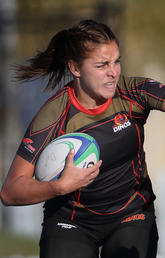