This systemic shortcoming in the administration of EPEA has been a primary focus of the Public Interest Law Clinic since its establishment in 2015.

Public participation in decisions made by Alberta Environment concerning the development of natural resources in Alberta is often blocked by a very narrow and restrictive reading of the ‘directly affected’ test for standing set out in the Environmental Protection and Enhancement Act (Alberta), RSA 2000, c E-12 (EPEA). Over the years, many Albertans have been denied participatory entitlements on the basis that they do not reside in close proximity to the proposed development project or are unable to establish how the decision will affect their personal use of a natural resource. One result of this narrow reading of ‘directly affected’ is that Alberta Environment approves resource development projects with very little transparency and no public input. This systemic shortcoming in the administration of EPEA has been a primary focus of the Public Interest Law Clinic since its establishment in 2015.

In July 2016, Alberta Environment amended the license of an Alberta landfill to authorize surface disposal of Naturally Occurring Radioactive Materials (NORMs) as waste. The Public Interest Law Clinic was retained by a client who seeks a public hearing under EPEA to raise health, safety and environmental concerns about the surface disposal of NORMs. Our client was denied a public hearing by the Alberta Environmental Appeals Board (EAB) on the basis that it is not ‘directly affected’ by the decision. Our client applied for judicial review of the EAB decision.

On December 11, the Alberta Court of Appeal decided in our favour in Normtek Radiation Services Ltd. v Alberta Environmental Appeal Board, 2020 ABCA 456, ruling that the EAB’s interpretation and application of the ‘directly affected’ test is unreasonable. The Normtek decision will ensure that the 'directly affected' test for standing is interpreted consistently with the statutory purpose of facilitating opportunities for public participation in resources and environmental decision-making in Alberta. The decision will also likely have implications for standing before other energy regulators including the Alberta Energy Regulator and the Alberta Utilities Commission.

In the News: Edmonton Examiner

Can Alberta really 'turn off the taps' to B.C.? Here's what we know about Jason Kenney's plan 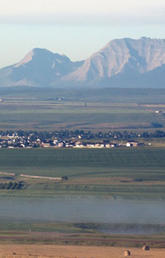