The long and the short of bone development

How did you get so tall? People of tall stature have been asked this throughout their lives. Oftentimes the answer is obvious – “oh, my parents are really tall.” But how come one person’s bones grow longer and faster than another’s?

“Sure, our genes are largely responsible for our stature,” says evolutionary biologist Campbell Rolian, a researcher in the McCaig Institute who studies skeletal variation in size and shape between individuals. “But we still don’t have a complete grasp of how genetic variation is translated into height variation – you versus me – at a cellular and developmental level,” he says.

Leg bones grow from the middle out. Specialized cells in bone, called chondrocytes, divide and produce cartilage at either end – an area called the growth plate. The cartilage produced by chondrocytes serves as a “scaffold” for mineralization by bone cells (osteoblasts). During adolescence, cells in the growth plates start to die, the growth plates get smaller and smaller until they fuse, and adult stature is attained. “There’s a lot that can go wrong at this point in bone development,” says Rolian. “Sometimes cells continue to grow and we get limb length discrepancies or osteosarcoma (bone cancer). Sometimes the cells don’t divide enough, or don’t produce enough cartilage, and we get weaker bones or skeletal disorders such as dwarfism.”

To understand what makes one individual’s limb bone grow longer than another, one can compare two extremes within the same population, while controlling variables like environment, nutrition and body mass. These factors are very hard to control in human populations, so Rolian and fellow McCaig Institute member Benedikt Hallgrimsson decided to embark on an artificial selection experiment in mice that would last five years.

They took a common white mouse stock and bred them. They then measured the length of the shinbone of the offspring with x-ray and selectively bred individuals with the longest bones. Five years and 22 generations later, Rolian has created a mouse in which shinbone length is 15 – 20 percent longer in relation to body mass, called Longshanks mice. These mice are “taller” than average and their bones grow faster. Interestingly, their bones are also weaker, having less spongy bone and breaking more easily compared with random-bred mice from the same stock. Using this mouse model, Rolian and his team can study the differences in the cells and tissues that encourage the bones to grow so much faster, and perhaps understand how the increased growth might be linked to lower bone quality. “If we can understand the whole process – from cell division, to cartilage growth to bone growth, then we may be able to develop ways to modulate rates of long bone growth and improve bone health,” says Rolian.

Campbell Rolian is an associate professor in the Department of Comparative Biology and Experimental Medicine in the University of Calgary’s Faculty of Veterinary Medicine, and a member of the McCaig Institute for Bone and Joint Health. 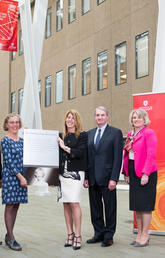 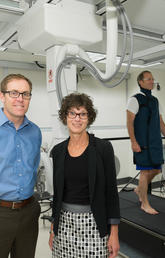