“People have said to me, ‘You should pick a disease to study and stick to it for your whole life.’ But that’s just not my approach, I’m more of an opportunity guy,” says Derrick Rancourt, PhD, a professor in the departments of Oncology, Biochemistry and Molecular Biology, and Medical Genetics.

As a stem cell biologist, Derrick’s research impacts various disease classes, which he says is the coolest part of his job.

“I’m also the director of the Clara Christie Centre for Mouse Genomics, and the chair for the Animal Care Committee,” he says. “Part of my portfolio is related to animal – largely mouse – research, but I also oversee all of the animal care activities that are done here at the CSM.”

Originally from Sault Ste. Marie, Ontario, Derrick was inspired by his high school biology teacher to pursue a career in science. He recalls his teacher seating the students based on their academic scores — with the front row being named “University Avenue” and the last row called “Skid Row.”

“He just made biology really fun and interesting, and that’s how I learned about biochemical pathways,” says Derrick. “I remember him encouraging us to draw nice pictures and colour them, and I remember taking all of that very seriously.”

Although he was also interested in history and geography, and once had dreams of becoming a physician, Derrick chose to concentrate on science based on career prospects. Eventually, his career took him towards research.

In 2015, Derrick applied for the Research Enhancement Program, a program designed to give principal investigators or lab members an opportunity to obtain training in new techniques and methodologies to enhance research projects.

He was granted $5,000 to visit Dr. Geoff Maksym at Dalhousie University, where he learned about a technique called magnetic twisting cytometry, a method Derrick describes as a way to “tickle” cells.

“There aren’t many people in the world that do it so I was really delighted to see that somebody from Halifax was doing it,” he says. “I subsequently did my sabbatical in his laboratory. A grant we submitted to the Canadian Institutes of Health Research was recently funded and we’re going to be doing some experiments in the near future.”

Eventually, Derrick says he’d like to retire in Halifax to be near his two children and perhaps start his own consulting business as he’s always been interested in entrepreneurship.

“In some ways, professors are entrepreneurs,” he says. “We do all the same things that an entrepreneur does except we’re not trying to make money, we’re trying to raise money. In a sense, you could say that a laboratory is like a not-for-profit. I also really enjoy coaching students about entrepreneurship.”

Before he retires, however, Derrick says he’d like to do more work in the area of professional development for graduate students.

“I really think this is an area that academia needs to invest heavily in,” he says. “Grad students are transitioning into the world and they need to have these skills. If I were to leave a legacy, I’d like to leave a legacy where professional development for grad students becomes a very important issue here at the CSM.”

Top three favourite movies: “I like the epics. My favourites are Braveheart, Gladiator and Interstellar. I really enjoy their soundtracks too!”

Where he’d like to see the CSM in the next 50 years: “It would be great to see some strategies developed to encourage people to collaborate more and take advantage of the numerous spheres of influence within the CSM community.” 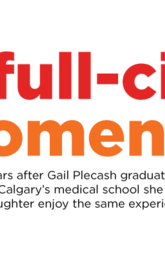