Dr. Vonderheide joined CMF as an instructor of Film Studies in January 2021.

The Department of Communication, Media and Film is delighted to welcome Dr. Leah Vonderheide to the University of Calgary. Dr. Vonderheide is a scholar of film studies, and gender, sexuality and women's studies. Her research focuses on the topics of global cinema, feminist film theory, film and ethics, and strategies of resistance across fiction, documentary, and experimental film and media. Dr. Vonderheide's current project seeks to engage and expand the parameters of "fourth cinema" - the cinema of Indigenous Peoples - by exploring the film and television works of Indigenous women in Australia and Aotearoa New Zealand. A key component of Dr. Vonderheide's project (and the focus of her current book manuscript) is the critical role played by Māori filmmaker, Merata Mita in decolonizing the screen for Indigenous film and media makers across the globe. Prior to joing CMF, Dr. Vonderheide was a Mellon Postdoctoral Fellow of Cinema Studies at Oberlin College (Ohio); her current research project was awarded a National Endowment for the Humanities (NEH) Summer Stipend in 2020.

In her first term at the University of Calgary, Dr. Vonderheide is teaching Introduction to Film Analysis, Global Indigenous Cinema, and The International Film Musical. Dr. Vonderheide has taught many courses in the past including: Theory and History of Global Cinema; Global Women's Documentary; New Zealand Film; French Cinema: From the National to the Global; Funny Women: Women, Comedy, and Film; Race, Gender, and Sexuality on Screen; Sex and Pop Culture in the Postwar US; Contemporary Cinema; Survey of Film; Introduction to Media Studies; and Writing for the Screen. Dr. Vonderheide completed her PhD in Film Studies and Graduate Certificate in Gender, Women's & Sexuality Studies at the University of Iowa. Her MA in Theatre and Film Studies was completed at the University of Canterbury in Christchurch, New Zealand, and she received her BA in French at Davidson College in North Carolina.

We caught up with Dr. Vonderheide after the first week of the Winter term:

What excites you about joining the CMF department at UCalgary?

“First of all, I have been incredibly moved by the warm welcome and support I have received from everyone in the department and at the university – particularly noteworthy given the current circumstances. It makes me all the more excited to meet everyone in person!”

“Secondly, I’m excited to join a faculty that is committed to growing its curriculum in the areas of Indigenous cinema and feminist film history. This semester I am teaching a newly designed course, Global Indigenous Cinema. It’s an amazing opportunity to bring my research on the works of filmmakers such as Merata Mita and Rachel Perkins into the classroom – and place their films in conversation with films by Alanis Obomsawin, Lisa Jackson, Tasha Hubbard, and Loretta Todd. Ultimately, the course will explore the broad scope of global Indigenous cinema, discovering narratives underpinned by the oral tradition, ritual, and the collective consciousness and themes related to motherhood, identity, self-determination, and sovereignty.”

“Working in collaboration with my students and colleagues is both inspiring and motivating. Visual media, like film, impacts the way we view the world and one another. So, on a fundamental level, my work is about developing the critical tools to understand how this process works. Given the rapid evolution in communication technologies in the 21st century, my students have grown up in a vastly different media landscape than the one I was raised in. That means they bring an important perspective to film and media analysis. I speak in earnest when I tell my students that I come to the classroom space to grow knowledge together.”

What are some interesting facts about yourself? 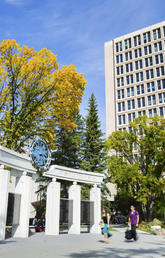