AlumNight: Networking Doesn’t Have to be Intimidating

How to network with purpose means you’re not there to ask for favours but to make connections. The right connections

Looking for a job? You better start networking. Have a job and want to keep it? You better start networking. Hob-nobbing, schmoozing, networking — call it what you will but it’s a critical lifelong skill, especially if job security is questionable. In theory, we know all this yet so many of us continue to moan about the stress behind the practice of networking. Some say it’s because we feel morally compromised, or ‘iffy,’  about putting one’s self interest ahead of any kind of higher purpose.

Well, we in Alumni think we should all get over it. Precisely why the theme behind an upcoming AlumNight is networking — full stop. At the wrap of the 2.5-hour evening event you should know how to not only make networking productive but energizing, as well as how to diversify your network and make the process a valuable two-way street.

Rather than gather advice from just one person, the Mar. 18 event at Inglewood’s Ol’Beautiful Brewery will showcase networking hacks from a panel of five: Two Olympic hopefuls (Jessica O’Connell, MSc’16, and Sam Effah, BComm’14,); career coach Brian Palmer, BComm’06; recent athlete ambassador for Team Canada, Shacarra Orr, BA’19, and management consultant Sarah Damberger, BA’13. With five radically different perspectives, the lively team of recent alumni will tell you how they gained traction in their careers, and lives, by leveraging their networks effectively.

Here are a few networking tips in advance of the event — and remember meeting people, face to face, is still the best way to land your next job. So, join us!

Besides sharing personal anecdotes, the panel will also impart advice plus, there will be plenty of opportunity to test out your new networking skills in a speed-networking game. AlumNight is a program for UCalgary alumni who have graduated within the last 10 years. Discover more here. 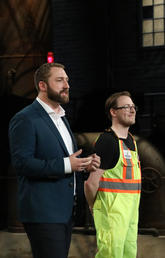 Dragons’ Den Star Got His Start at College Pro

In the News: Alumni

In the News: Alumni