2022 Faculty of Nursing Pursuit of Excellence Awards call for nominations

In his six years as a member of the Faculty of Nursing Pursuit of Excellence Awards committee, MJ Calungcaguin (BN’17) has many memories of food, fun and – oh yes – intense deliberations that “sometimes felt like a brawl to the death!

“That’s a challenge of being on the committee,” Calungcaguin admits. “I tend to think one person/team deserves an award in a category, and another committee member may think otherwise. That's why you've got to get your rationale in order. The goal is to attack - I mean sway the other committee members!”

The awards are poised to launch for 2022 on Dec. 8 for the 12th consecutive year. A generous donation from Covenant Health enabled the faculty to initiate a long overdue program of recognition and it was labelled as the Covenant Health Faculty of Nursing Awards for six years. When funding ran out, the faculty decided to continue the program. For Calungcaguin, who joined the committee as an undergraduate student and who has continued on as an alumni representative, the awards are more important than ever.

”People need their spirits brought up, especially now during these bleak times.  And I still like hearing all the great things UCalgary Nursing is up to. It keeps me connected.”

The 2022 awards are opening earlier to give people more time to craft their nominations. There will still be nine nominated awards in the following categories:

There is also a Committee's Choice Award. This year, the committee made the decision to eliminate the “preceptor” name from the mentor award due to confusion in some of the 2021 nominations in this category. Preceptors are now included in the Undergrad Teaching Excellence Award. The nominations close on Friday, March 4, 2022.

Calungcaguin encourages everyone to submit a nomination, but cautions to write a strong letter. “The committee scores each nomination based solely on the letters, and we leave our biases at the door (especially when committee members personally know the nominated),” he explains. “It's almost immediately evident when a letter lacks passion. Also, remember the criteria. Be explicit with specific and meaningful examples. That's what we're looking for. “

Due to conflicts of interest, nominations of the committee members are discouraged. Visit nursing.ucalgary.ca/excellenceawards and find Awards Committee Members at the bottom of the page for the 2022 team. However, Calungcaguin notes, “we have allowed deliberation on these nominations in the past, particularly when the committee member being nominated was unaware of the nomination. That does happen.” He recalls a few years ago when this occurred and says this is when the strength of the nomination letter(s) really makes a difference. “This committee member of course was excused from the deliberation. Basing our decision solely off the letters, I could see the dismay on the faces of all other committee members when we decided not to vote in favour of the committee member who was nominated. It was hard because we knew them personally, and were so closely aware of this person's accomplishments and personal characteristics. But we had to be objective and rely strictly on the supporting letters.” 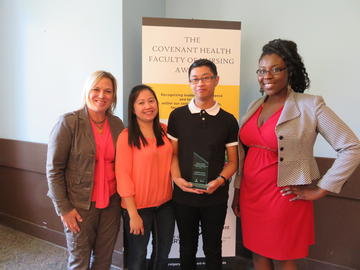 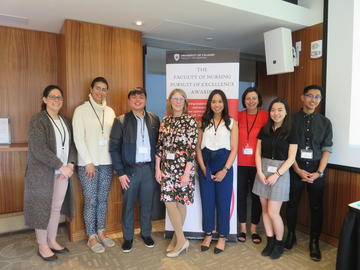 Calungcaguin looks forward to 2022 and relishes an intense debate once more on the merits of one candidate over another. And he has no plans to leave the committee in the future. “Well, Karen (Cook, UCalgary Nursing senior manager, communications) is one heck of a committee chairperson. Meetings don't feel robotic, and the work isn't mundane. It really is fun. I miss those days when we celebrated in person: I could feel the gratitude of both the nominated and recipients. But despite being virtual, that sense of community that the awards engender is unmistakably joyful. And so that's why I stay on. I have no plans to leave, and I hope no one has any qualms about that!” 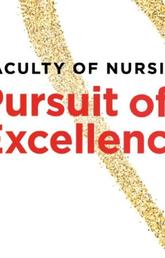 2021 Faculty of Nursing Pursuit of Excellence Awards call for nominations